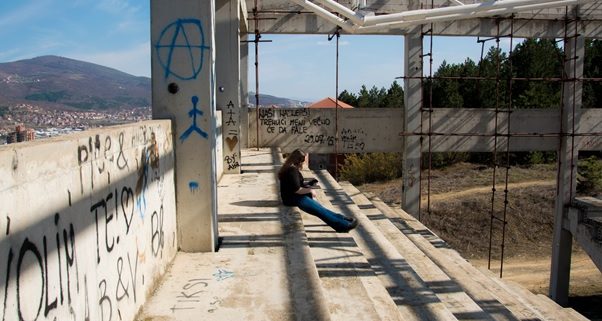 So Eefje, you’re in Mitrovica for the March Training Week. Can you explain what a training week is and how does it look?

“So, when we study at the Rockacademie, you can choose to take classes in band coaching and music education. I did that for six months, but ended up choosing a different route for graduation: sound engineering. I still really like band coaching and education, though. So occasionally band coaches, or, if they aren’t available, other students that are good teachers, are asked to join projects like training weeks at Mitrovica Rock School. For the students, it means leaving school for a week, going to Mitrovica (or Skopje) and getting a LOT of experience in band coaching and teaching in a very different environment than we’re used to.

“In general, it’s a week of pretty intense rehearsals for bands to prepare for a show at the end of the week. We join the rehearsals each day as band coaches, to help out in the process and to see if we can support the musicians in any way in their activities. I also do songwriting workshops for whoever wants to join, where I like to talk about things like the inner critic, writing exercises and song structures.”

How does working with the students and the bands look and feel like? Are there any good or bad sides to it? Which are the most common obstacles you stumble upon during the coaching?


For people in Mitrovica Rock School, I feel like music is a very specific and important part of life, as a way of expressing yourself and bonding with others. It’s taken very seriously, but also in a way where anyone who wants to, can make music.

“The thing that always sticks with me is how different the culture is from Holland. For people in Mitrovica Rock School, I feel like music is a very specific and important part of life, as a way of expressing yourself and bonding with others. It’s taken very seriously, but also in a way where anyone who wants to, can make music. I experience things very differently in Holland, where sometimes people see music as a fun bonus, an extra activity if you have an hour left after your school and work and social life. Working with students that are so dedicated to music always has a very positive effect on my own mindset and energy, and it makes me very happy.

“For the most part, when I’m bandcoaching, I just like sitting on the sidelines and only jump in when I think it’s needed. So I’m really a mostly unnoticed audience member most of the time, and I just enjoy watching people work together to create music (and I’ll also have their songs in my head for the next two months). When the process slows down or stops, I can jump in and give some pointers to get the band moving again.

“If there’s any obstacle at all, it would be the language barriers! Though I don’t really mind that at all, I think it’s fun and interesting and it’s not very difficult to work with for me. But making sure your point comes across when you don’t speak each other’s languages well can be quite tricky.”

Since this is your second visit to Mitrovica and Kosovo in general and you kind of settled your opinion about it, what do you think? Is it the same way the press represents it and what is your general opinion about the people, mentality, the city, and the conditions here?

“The funny thing about Kosovo and Mitrovica is that it’s barely ever talked about in Dutch press. For some reason, I wasn’t taught anything in all the years of history classes I’ve had and there was nothing about it on the news, so when I joined the project I had to do a LOT of research before I understood anything. I’m certain that at this point I still don’t understand half of it, but the big picture is getting a bit clearer slowly.


I can really take time and focus on people here, instead of having to rush to the next thing and finishing jobs and keeping deadlines and stuff.

“Now that I’m not so culture shocked, it’s easier to settle into the flow of life in Mitrovica. For me, it’s especially different because for one week, I’m only focusing on this project, instead of juggling school, work, my own projects, my social life, my family and whatever else I’m doing. I get to have deep conversations with people, really take time to get philosophical about things, or walk to a weird unfinished stadium-type structure on a mountain and sit there for two hours and listen to cool songs, or drive just outside of town and hang out in the sun on a paddle boat. I can really take time and focus on people here, instead of having to rush to the next thing and finishing jobs and keeping deadlines and stuff.

“I think people here are way more invested in the people around them, I feel like you spend a lot of time together and in groups, which is very different from Holland, but I enjoy it sooo much. One thing I just never understood, though… What’s with all the trash, dudes?”

Bo, you’re visiting Kosovo for the first time. Was there any skepticism before coming here? Were you feeling like you might be potentially putting yourself in danger by coming?

“I wasn’t expecting it to be dangerous, but I didn’t know what to expect and what the situation would be. How the people would communicate from the different sides was my biggest question. I talked a lot with Jurre and Eefje before we left so I think I had a pretty clear image of Mitrovica.”

“The training week was a very special experience for me. I met so many wonderful people and I feel honored that I could be a part of the project. I also learned a lot from the band coaching and the workshops for my own growth as a teacher.”

“This was the first time I was involved in a project like this and it was actually the first time I had to coach in English. I didn’t really know what to expect from the project but it was so nice to see people connecting over music.”

Want to join the discussion?
Feel free to contribute!

Rock and roll helps us rise above the political madness: interview with Liza...
Scroll to top

We may request cookies to be set on your device. We use cookies to let us know when you visit our websites, how you interact with us, to enrich your user experience, and to customize your relationship with our website.

Click on the different category headings to find out more. You can also change some of your preferences. Note that blocking some types of cookies may impact your experience on our websites and the services we are able to offer.

These cookies are strictly necessary to provide you with services available through our website and to use some of its features.

Because these cookies are strictly necessary to deliver the website, refusing them will have impact how our site functions. You always can block or delete cookies by changing your browser settings and force blocking all cookies on this website. But this will always prompt you to accept/refuse cookies when revisiting our site.

We fully respect if you want to refuse cookies but to avoid asking you again and again kindly allow us to store a cookie for that. You are free to opt out any time or opt in for other cookies to get a better experience. If you refuse cookies we will remove all set cookies in our domain.

We provide you with a list of stored cookies on your computer in our domain so you can check what we stored. Due to security reasons we are not able to show or modify cookies from other domains. You can check these in your browser security settings.

These cookies collect information that is used either in aggregate form to help us understand how our website is being used or how effective our marketing campaigns are, or to help us customize our website and application for you in order to enhance your experience.

If you do not want that we track your visit to our site you can disable tracking in your browser here:

We also use different external services like Google Webfonts, Google Maps, and external Video providers. Since these providers may collect personal data like your IP address we allow you to block them here. Please be aware that this might heavily reduce the functionality and appearance of our site. Changes will take effect once you reload the page.

The following cookies are also needed - You can choose if you want to allow them: