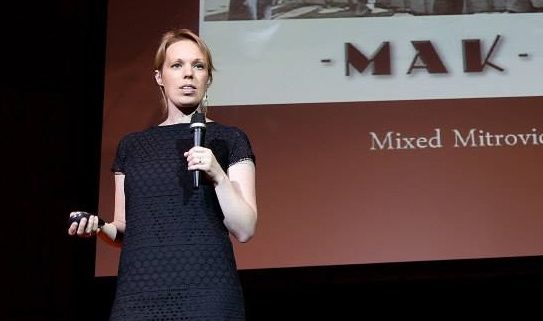 “The town is made by its people and for that Mitrovica is probably my favorite place to be. “

What’s your job in the school?

I’m a project manager, which means that I raise funding for the school, I work with Emir and Liza to make sure that we’re achieving the goals we said we’d achieve, I keep track of the financial side, and try to learn from what we do: are students happy with the program? Could we do anything differently? So a combination of writing, coordinating, and finance.

How did you discover Rock School and the whole idea behind it?

After I graduated university I wanted to work internationally, but I discovered that that was not an easy switch from the job I’d been doing as legal translator. To gain some relevant experience, I started volunteering as a fundraiser one day a week at my mom’s organization, Musicians Without Borders. At that time, early 2008, MWB was raising funding for the first Skopje Summer School. The Rock School was still just an idea then, this was going to be the first real activity. I can remember when I was asked to be present at the summer school: I was so excited to see the project I had been working on in action.

It wasn’t until we were actually in Skopje that we really decided to start in Mitrovica. The summer school was such a success that we didn’t want to lose the momentum, so we started raising funding for the school’s start-up immediately after we came back from Skopje. In October 2008, I came to Mitrovica with Ruud Borgers (RockCity Institute) and Gerdien Visser (Fontys Rockacademie). The north branch had just started, and Ruud went instrument shopping with Edon Ramadani so that the south branch could start the following month.

It was very different. The Mitrovica Rock School was only a project then, not yet an organization. We partnered with CBM at the time. The distance and combining two jobs became difficult, so I gave up my job as legal translator and moved to Mitrovica in December 2009.

There was always great energy. Everyone really wanted the Rock School to work and we were all proud to be part of it.

Both school branches were smaller and more improvised, but that was also kind of nice. There was much less connection between the two branches, just summer schools and training weeks for the teachers. Almost all bands were cover bands. So in that sense we’ve really grown. But there was always great energy. Everyone really wanted the Rock School to work and we were all proud to be part of it. Already in 2008, you could see MRS t-shirts everywhere.

Most people don’t really like their jobs, how about you?

I love my job. I’m very aware of how lucky I am to be doing something that I enjoy doing and where I feel I contribute something meaningful. And I’m surrounded by people who also love their jobs, which makes for a great working atmosphere.

We were always sure that the Rock School “worked.” But that didn’t always result in the school being “fundable.”

It’s not always easy though. When I was living in Mitrovica I had a lot of friends but felt pretty alone in my role. And there’s been a good amount of stress around the sustainability of the school. We were always sure that the Rock School “worked”: we could see the impact on people’s lives every day. But that didn’t always result in the school being “fundable.” It was difficult to depend on the changing priorities of donors, many of whom seem to discourage the kind of long-term approach that made the school successful. Now we’re in a better place, and I hope we’ll continue this way. Regardless, I’m super proud we’ve been able to keep the school going for 11 years already. The next goal is 20, obviously.

It’s really exciting to be cooperating now with Roma Rock School and Music School Enterprise under the project Music Connects. Everything is new and different again, and I feel challenged professionally, which is always good.

How would you describe Rock School to a person who doesn’t know anything about it?

The Mitrovica Rock School is a rock school in Europe’s most divided city, where youth from all backgrounds work together to restore the city’s proud rock music heritage. This works because there is a demand for this kind of education, and because the quality of the education is high, and we make a real investment in our students. Our focus is on creativity, ownership and empowerment.

From my own perspective: the school offers opportunities that are taken for granted in the West – the freedom to develop your own creative identity – which every young person deserves. People who focus on their art will of course connect with others with similar interests. We don’t try to “forge connections” in this way, it happens naturally.

What connection does the school have with Musicians Without Borders?

The Rock School started as a project of Musicians Without Borders (MWB) and Community Building Mitrovica (CBM), with didactic support from Fontys Rockacademie. (In the early days there was a fourth partner, PAX, who had introduced MWB and CBM.) Now the Rock School is both an independent NGO and a project. MWB continues to raise funding for the MRS and we co-implement the program. Our roles are pretty well defined and the cooperation is very good, there is a lot of trust and our communication is very open. This is important, especially since I work from a bigger distance since moving back to the Netherlands last year. In addition to myself, several of my colleagues coach the MRS team on finance, PR and monitoring & evaluation.

I love Mitrovica. People do a lot to make cool little corners and bring beauty into their lives.

Could you tell something about Mitrovica as a city?

I love Mitrovica. I love the differences between the north and the south, the atmosphere, and the friendships I have there. The town is poor and you can see that, but people do a lot to make cool little corners and bring beauty into their lives.

When I moved to Mitrovica, I felt really welcome: I was made to feel at home and had no trouble making friends. I know many other foreigners who feel the same way. At the same time I’m quite aware that being in Mitrovica was a choice for me, and that the ability to leave any time was a luxury most Mitrovicans don’t have. And it’s easy to love both sides if you don’t have a history there and feel safe on both sides. The way the situation is played out politically, over the heads of people who live there, makes me angry. But the town is made by its people and for that Mitrovica is probably my favorite place to be.

I like Yugo punk – I did already before I married into it.

Do you have a passion for rock music as well? If so, recommend some cool bands

I do but I get really stuck on the same bands. Right now I mostly listen to Foo Fighters, Audioslave, Art Brut, Arcade Fire, Maximo Park, etc. Pearl Jam will forever be the best band. I really want to see them live one day (last year I briefly considered changing our moving date to the Netherlands by several months because Pearl Jam was playing in Amsterdam.) But I also have a thing for the Dixie Chicks and bluegrass in general. And I like Yugo punk – I did already before I married into it.

Share some nice memories regarding to school with us

And in April 2017, when we were in Skopje with four mixed bands and we suddenly had to leave because of a possible coup. We were able to move the whole group and the final concert to Gracanica. It was really strange fleeing from Skopje to Kosovo, since we’d always been going to Skopje for security reasons and because everyone felt more comfortable there. So it showed how far we’d come. And I was so impressed by how quickly the team adjusted to put all the logistics in place. The concert was a big success: the bands were really nervous but really good!

More projects should be like Mitrovica Rock School: demand-driven, and long-term, and making an investment in people

More projects should be like Mitrovica Rock School. I mean in the sense of being demand-driven, and long-term, and making an investment in people. All these short-term initiatives are not going to have any impact besides making people cynical about non-profits. I hope that the current recognition of the importance of monitoring, evaluation and learning, both among donors and among non-profits, will help to make this case.

Ultimately, solutions have to be holistic, working at government level all the way down to real people in the streets. A political deal means nothing if people don’t feel their daily lives are working.

Want to join the discussion?
Feel free to contribute!

We may request cookies to be set on your device. We use cookies to let us know when you visit our websites, how you interact with us, to enrich your user experience, and to customize your relationship with our website.

Click on the different category headings to find out more. You can also change some of your preferences. Note that blocking some types of cookies may impact your experience on our websites and the services we are able to offer.

These cookies are strictly necessary to provide you with services available through our website and to use some of its features.

Because these cookies are strictly necessary to deliver the website, refusing them will have impact how our site functions. You always can block or delete cookies by changing your browser settings and force blocking all cookies on this website. But this will always prompt you to accept/refuse cookies when revisiting our site.

We fully respect if you want to refuse cookies but to avoid asking you again and again kindly allow us to store a cookie for that. You are free to opt out any time or opt in for other cookies to get a better experience. If you refuse cookies we will remove all set cookies in our domain.

We provide you with a list of stored cookies on your computer in our domain so you can check what we stored. Due to security reasons we are not able to show or modify cookies from other domains. You can check these in your browser security settings.

These cookies collect information that is used either in aggregate form to help us understand how our website is being used or how effective our marketing campaigns are, or to help us customize our website and application for you in order to enhance your experience.

If you do not want that we track your visit to our site you can disable tracking in your browser here:

We also use different external services like Google Webfonts, Google Maps, and external Video providers. Since these providers may collect personal data like your IP address we allow you to block them here. Please be aware that this might heavily reduce the functionality and appearance of our site. Changes will take effect once you reload the page.

The following cookies are also needed - You can choose if you want to allow them: